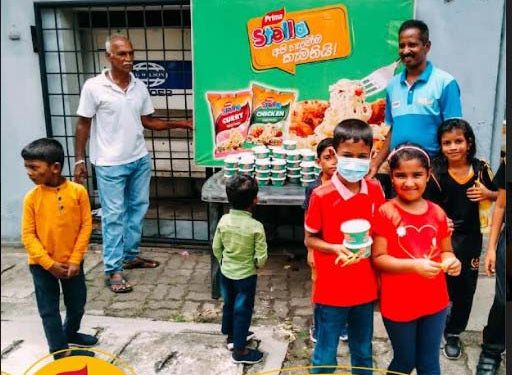 Prima Stella celebrated World Children’s Day this year by joining hands with the non-profit volunteer group, ‘The Samaritans’ in its ‘3000 Smiles’ meal programme. The initiative was implemented and mobilised by The Samaritans with the aim of providing a meal to children across the nation.

Ceylon Agro Industries Limited (Prima Group), provided Prima Stella Cup Noodles and other additional nutritious food ingredients for the students at the Boralasgamuwa Maha Vidyalaya, Boralesgamuwa. In addition, students who stayed after school for the classes conducted by the school to prepare them for the GCE Ordinary Level Examination were provided with a lunch packet each courtesy of Prima Stella.

The meal programmes organised by The Samaritans were carried out primarily in schools, but also included religious places and community centres to reach a wider audience. The programme has covered many parts of the country, including but not limited to Colombo, Kandy, Kilinochchi, Pottuvil, Baddegama, Maskeliya, Palmadulla, Monaragala, Hikkaduwa and Godagama. In addition to providing meals and other gift items, a range of educational and entertainment activities were organised in selected locations to lift the children’s spirits.

Speaking on the occasion, Deputy General Manager of Ceylon Agro Industries – Prima Group Sri Lanka, Mr. Sajith Gunaratne stated, “This initiative undertaken by The Samaritans is commendable, as a group that has won the trust and patronage of many generations, we’re pleased to be a part of this programme that strives to improve the health and nourishment of the next generation.”

Commenting on the collaboration, Ricky Simms from The Samaritans noted, “The Samaritans have carried out meal drives since June 2022; so far, we have provided 9,712 meals to children and elders across the country and hope to do many more continuously going forward. The Samaritans is thankful to Ceylon Agro Industries, Prima Group Sri Lanka for coming forward to help in this initiative and we hope to work together going forward in this worthy cause.”

Furthermore, over 10,000 cups of Prima Stella Noodles were distributed in lieu of many World Children’s Day celebrations across the country in collaboration with local government authorities. Committed to giving back to the community it operates in, Ceylon Agro Industries of Prima Group hopes to pursue more initiatives of similar nature to assist the nation’s fight against food insecurity among vulnerable communities of the country.