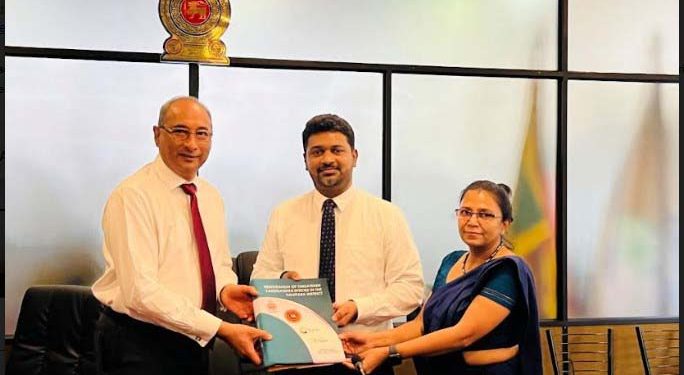 Strengthening its commitment to drive biodiversity regeneration and environmental conservation, Hayleys Group subsidiary and leading textile manufacturer Hayleys Fabric partnered with the Central Environmental Authority (CEA) and the Universities of Peradeniya and Wayamba to champion the protection of habitats connected to tributaries of the Bentota River.

The Rs. 1.5 million initiative aims to stabilise the river banks of the Ihala Hewassa, Kaludola and Kalugala streams with the conservation and regeneration of the three endangered Ketal (Lagenandra) species.

“Our commitment to a sustainable future runs deep. Working in line with the Hayleys Lifecode, an ESG (Environment, Social and Governance) driven roadmap for the Hayleys Group, we have taken extensive measures to ensure each aspect of our manufacturing process is sustainable and environmentally friendly.

“Most recently, we invested in nine acres of wetland adjacent to our factory premises to preserve biodiversity and raise awareness of the unique endemic species found within its borders. Having understood that the most severe threat to the survival of life on earth is the loss of biodiversity, we look forward to supporting our partners and extending our commitment to environmental preservation to ensure yet another area in our vicinity is protected and thrives under their guidance,” Hayleys Fabric Managing Director/CEO Rohan Goonetilleke said.

Moreover, measures have been taken to increase public awareness of the importance of Ketala among the community and schools by the CEA, local authorities, Forest Department and Walallwita Divisional Secretariat. Additionally, the selected banks will be monitored by select community members under the supervision of the relevant Grama Niladharis.

“Rivers and wetlands are fundamental to secure water resources for our country. However, natural causes and human interventions have accelerated the degradation of river banks. Given that one of the recommended methods to halt erosion is the restoration and retention of the natural flora and fauna that have made it their habitat, this particular project will have the dual purpose of protecting our banks while conserving endemic and endangered plants like Ketala,” CEA Director General P. B Hemantha Jayasinghe said.

Having kicked-off preliminary investigations and site visits for the project, Phase 1 of the project is underway in the Kalutara and Galle districts, with the germination of the selected Ketala seedlings taken on by the academic team led by leading plant taxonomist at the University of Peradeniya, Senior Professor Deepthi Yakandawala.

Commenting on the initiative, Professor Yakandawala said: “Sri Lanka has recorded 13 species of the Ketala, ten of which are endemic to the country. Five are listed as critically endangered, four as endangered, and one species is critically endangered or possibly extinct. Given that many of these plants were removed and sold as ornamental plants, much has to be done to protect and conserve the species. With this initiative, we will not only be able to reintroduce the species to the river banks but also conserve it in its natural habitat in the Kalutara District. ”

The academic team from the Departments of Botany of the Universities of Peradeniya and Wayamba, as well as the Postgraduate Institute of Science (University of Peradeniya), are tasked with determining the environmental parameters associated with the streams in the chosen areas, investigations on flowering and fruiting phenology, ex situ seed germination and raising of plantlets; restoration strategies; and increasing public awareness of the importance of the conservation of Ketala.