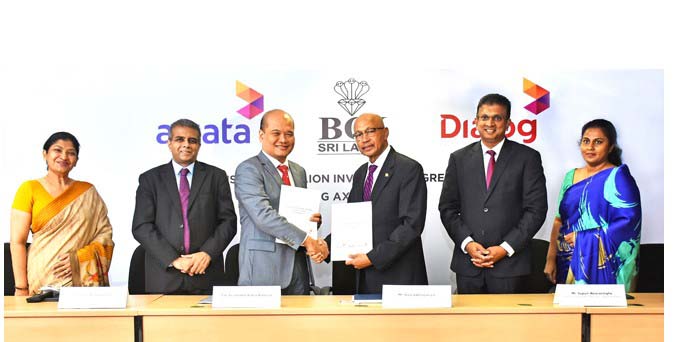 Dialog Axiata Group, the largest Foreign Direct Investor (FDI) operating under the auspices of the Board of Investment of Sri Lanka (BOI), announced the signing of two supplementary agreements with the BOI on September 13, 2022, for an additional USD 152.4 Mn (LKR 56.7 Bn) investment in Sri Lanka’s Telecommunications and ICT Infrastructure.

These agreements cover a wide range of Dialog Axiata Group telecommunications and ICT infrastructure development, including the expansion of mobile and fixed 4G-LTE networks to provide rural and deep-indoor coverage, the improvement of big-data analytics and customer interaction capabilities, the evolution of IP and fibre networks, and the continued development of the Group’s Wi-Fi and broadband networks. These advances are expected to provide more stable and cost-effective internet connectivity, as well as considerably contribute to propelling the nation’s mobile telephony and fixed infrastructure to the forefront of innovation, accelerating Sri Lanka’s transformation into a digital nation.

Dialog Axiata Group is a subsidiary of Axiata Group Berhad, Asia’s second largest telco with operations in eight countries including Malaysia, Indonesia, Bangladesh, Cambodia, Sri Lanka, Singapore, and India, and Axiata has been a committed and long-term investor in Sri Lanka since Dialog’s inception.

Dialog is the country’s largest Foreign Direct Investor (FDI), with a total investment of USD 3.1 billion. In this context, BOI acknowledged it as the first company to invest USD 1 billion in the country.

“Dialog Axiata has played an important role in propelling our country toward becoming a powerful next-generation digital infrastructure champion on a global scale.” Axiata, the country’s largest foreign investor, has been a steady and critical enabler of this path, especially in the face of uncertainty. We are pleased to see the company’s continued investments and unwavering commitment, which exemplifies the numerous opportunities available in Sri Lanka to foreign investors who believe in and are willing to invest in the country with the goal of capturing long-term value,” said Mr. Raja Edirisuriya, Chairman of the BOI.

Tan Sri Shahril Ridza Ridzuan, Chairman and Independent Non-Executive Director of Axiata Group Berhad, said in a statement, “As the largest FDI in Sri Lanka, this latest investment agreement bears testimony to Axiata’s continued confidence in the nation and our commitment to Sri Lanka and its people.” We consider Sri Lanka to be a vital innovation centre, where Dialog has accomplished many region firsts while adhering to its motto of providing ‘The Future. Today.’ As always, we cherish our long-standing cooperation with the Board of Investment and remain dedicated to investing in Sri Lanka to help it become a Digital Nation.”