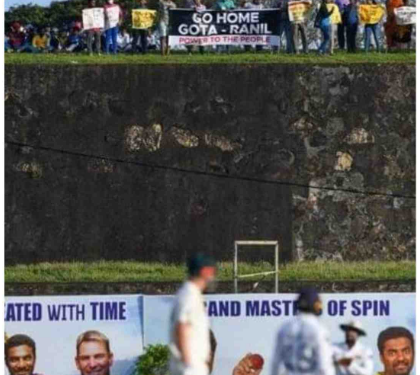 Touring Cricket players from Australia asserted that the protesters who were cleared from the ramparts of the Galle Fort, which overlooked the Galle Cricket Stadium, on Wed., Nov. 29 were not a distraction to their batters.

While Sri Lanka and Australia were playing their first test match at the cricket stadium, a number of demonstrators carrying anti-government banners and placards were forcibly removed from the Fort by military personnel.

As reported in media, the Sri Lankan Army had said that they had evicted antigovernmental demonstrators from the Fort so that they wouldn’t distract the Australian batsmen.

The Australian team, however, has refuted these allegations and maintained that the situation on the Fort was neither a problem nor hindered their performance.

Another change in the cabinet! Another explosion within government! Sajith urgently calls for attorneys! dispenses 80 letters! Did Ferdinando reveal the president’s confidential cabinet document? Anura delivered a message to Sajith! Basil emerges and gets to work. Rahas, Rajya (EXCLUSIVE)